The last medal of the Games 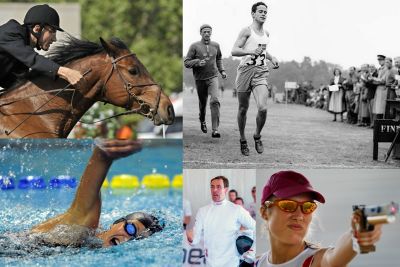 An Athlete at Modern Pentathlon (Starting from Horse riding)

I was now in 5thplace after the fencing and swimming. I thought I had seen it all as one of my competitors set the Modern Pentathlon Olympic Record but then I did horse riding...

You cannot win the competition in horse riding, but you can certainly lose it. As I jumped on my horse, Glen Gold, my arms were shivering as I took hold of the reins. I started trotting up to the starting point and I knewI could not let my country down. As I rode near to the jump I got more nervous by the second. I jumped over it only just missing the poles. One jump down, eleven more to go!

I can't exactly remember which jumps I knocked poles down on but my overall penalties where sixty out of one thousand two hundred. That was fortyobstacle penalties and twenty time penalties. That put me into 4th place after the fencing, swimming, and horse riding.

On to the combined event. I started in 4th so I started ten seconds after the leader. I ran straight up to the shooting range and shot at the targets as fast and as accurately as Icould. I carried on running still in 4th place and out the arena. As I came back in I was in 1stplace but sadly I got overtaken on the shooting. On the third lapround I overtook Margaux Isaksen and Yane Marques with the help ofthe roaring crowd. I did my final lap and stayed in that position. Finally I ran up to the finish line and crossed it in 2nd place! I got beaten by Laura Asadauskaite but that didn't matter, I got a silver medal for my country.